I practice a form of Qi Gong called Taijiwuxigong. One of the distinguishing features of this particular system is the manifestation of what’s known as spontaneous movement. This is such a fascinating phenomena that I wanted to share my experience of it with you. I don't claim to be an expert in Qi Gong, so the following is my best translation

Taijiwuxigong was a developed by Dr Shen during the 1900’s

What in the name is Spontaneous Movement?

Firstly, what is Qi Gong?

Qi Gong is an ancient Taoist practice and healing art that roughly translates as ‘energy work over time’. It was developed in China and other neighbouring countries by sages of the East over thousands of years. Using their wisdom and immense energetic sensitivity, they empirically explored the subtle energy dynamics of our bodies, mapping out what is known as the meridian system. Their findings were handed down and often shared in a master student relationship, creating many forms and lineages of qi gong. Meridians are channels in our bodies where Qi, Chi or lifeforce energy flows through and distributes all around the body. There are 12 main meridians, each connected to a particular organ system.

Qi Gong as a healing art is actually much deeper than just ‘energy work’. More specifically, Qi Gong is a disciple of mastering your own energy system over time. Gong means effort or work overtime. It is a healing art that you develop with refined action and consistent practice. One of the main purposes of Qi Gong is to maintain and increase the flow of Qi or Life force energy flowing through the energy channels or meridians of the body. After practicing Qi Gong for some time, you may develop the ability to influence the flow of the energy flowing through you. This can then be directed for healing purposes.

There many styles of Qi Gong.of both internal and external practices. External Qi Gong involves a variety of standing postures or movement sequences called Dao Yins. Dao Yins are slow gentle movements of the body in a conscious, synchronised and sequential manner to guide Qi through the body in a variety of ways. Certain movements or Dao Yins stimulate the flow of Qi through specific meridians and so practicing them can help to clear any blockages and increase the flow of energy through them.

Another important aspect of Taoist philosophy and Qi Gong is the development and activation of your three Dan Tian’s. Your lower Dan Tian, middle Dan Tian and upper Dan Tian. A foundational aspect Qi Gong is strengthening our lower Dan Tian. DanTian means Elixir field or Sea of Qi. There are energy centres in each on the body’s three main cavities: the abdomen, thoracic (chest) and cranial cavity. The Dan Tian's can store and drive energy through the meridian system of the body and can be cultivated for alchemical and healing purposes. 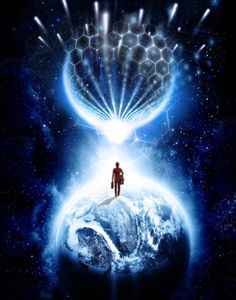 Certain standing postures and Dao Yins can activate the lower Dan Tian like a tuning fork due to a resonance that’s created between the earth and its conduction up through the meridians on the ball of the foot to the lower Dan Tian. The lower DanTian is said to store our Yuan Qi or Original essence.

The Earth Force vibration is called ‘Durchi’. As the vibration comes up the body through channels in the legs, it clears blockages and harmonises the flow of Qi through the meridian system.

When the lower Dan Tian is activated, it can be described as a cauldron of vibration that generates heat as it resonates the cells of your body.

The heat and vibration that’s created is said to burn up ‘Binqi’ pronounced 'Bin Chee' or ‘Sickness Factor’. Accumulating Binqi and the associated disruption to the balanced flow of Qi can lead to organ system imbalance. This is one of the driving factors that creates ill health in our lives.

As a metaphor, if there’s a kink in a hose (blockage in a meridian) then energy or pressure builds up before the kink. This creates an excess of energy in that area that may manifest as inflammation, pain, heat or redness.

On the other side of the kink, where little life force flows, there is an energy deficit that can lead to deficiency conditions. These may manifest as the breakdown of tissue, stiffness, dryness and overall lack of vitality.

The internal alchemy of Qi Gong is a process of harmonising the yin yang polarity found with the body. It supports greater balance and coherence, both internally and externally and aligns us with the dynamic patterns of the cosmos.

What is Spontaneous Movement?

I mentioned earlier, one of the distinguishing features of the Taiqiwuxigong system is the use of what’s called spontaneous movement.

The body also uses spontaneous movements as an auto-regulating function, to restore balance: when the eyes get too dry, they blink, when the body is tired, we yawn and stretch the spine, when something disturbs the throat we cough etc. This natural spontaneous movement usually does not occur in other muscles than those associated with these specific activities.

As you activate your lower Dan Tian by practicing the standing postures and Dao yins, there is a pumping force that drives qi through the meridian system. 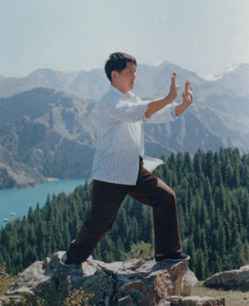 The age and health level at which you start your Qi Gong practice will influence the ability of the Qi lifeforce to flow smoothly through your meridians. Healthy young children naturally have strong active Dan Tians with few hindrances to the flow of Qi through their body’s meridian system. This is a representation of not only their physical health, but also the emptiness of mental constructs and conditioning that can alone restrict the current of vitality flowing through their body.

The initial stages of this Qi Gong practice are aimed at increasing the energy flow through the central, front and back channels. The appearance of Qi meeting resistance in a meridian is expressed outwardly as physical shaking. Initially there may be shaking in the limbs, a slight hopping of the feet and flapping of the arms. This can appear quite erratic and lack any aesthetic. There’s a reason why K1 meridian on the ball of your foot is called ‘bubbling spring’ as it literally channels the earth pulse into us and at times can lead to significant hopping.

At later stages, developed with consistent practice, all meridians are opened. As the flow of Qi increases, then the movements that come out get increasingly more graceful. I feel these smooth motions are an expression of the natural flow of energy around us. 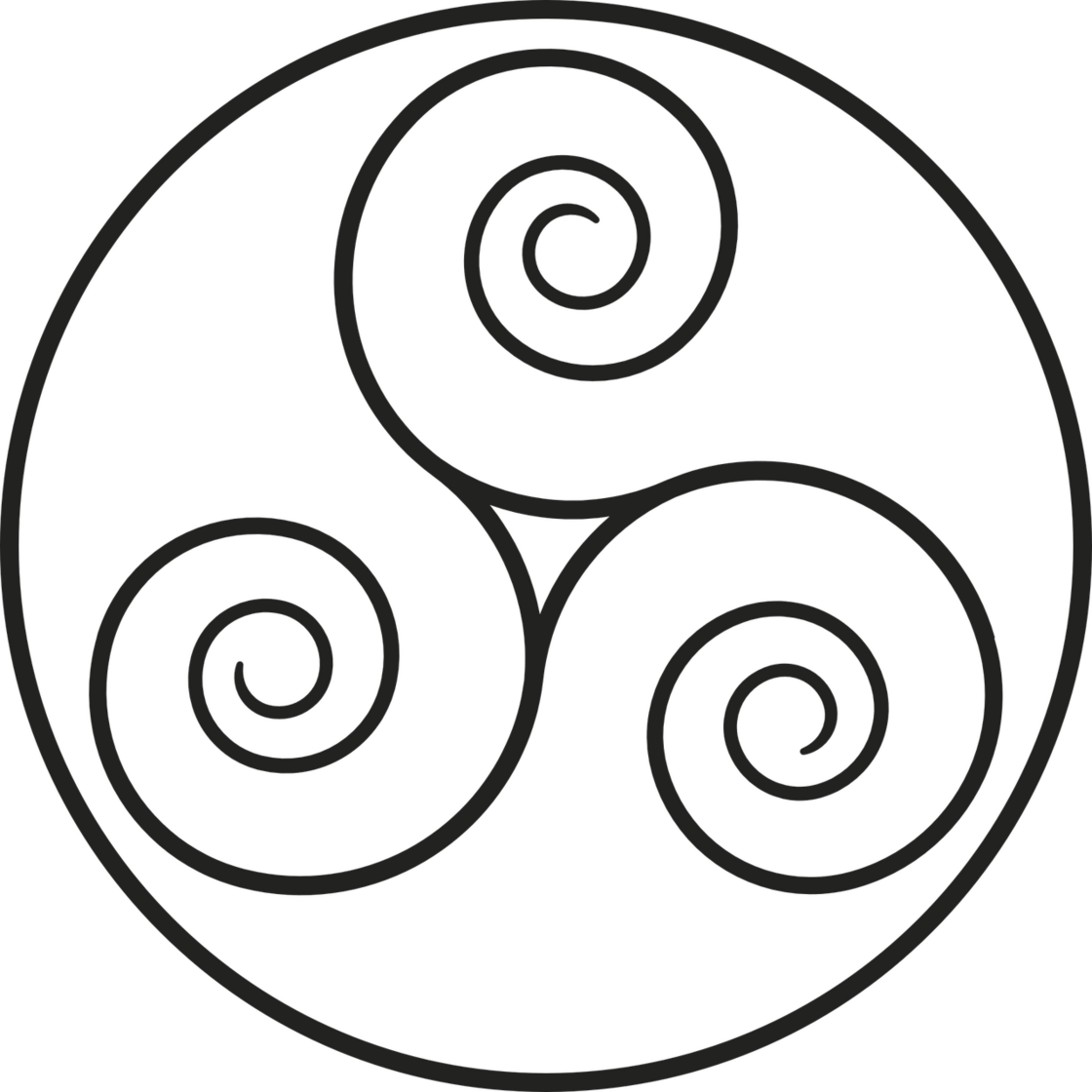 In Celtic symbology and many other cultures, they often depict spirals, figure of 8 and infinity patterns describing the flow of energy in nature.

Researchers in the field of unified physics are revealing that space-time has a fundamental quantised structure that has dynamic, flux like properties. This structure twists due to an inherent torque based on the golden ratio or phi spiral proportions. These patterns are fractal in nature, meaning the pattern is seen at all scales, from very tiny Planck scale oscillations to the larger fields of astronomical scale. We can observe this life geometry in snail shells, flowers, and the spiralling of our galaxies. As above, so below.

Spontaneous Movement is also related to the function of the autonomic nervous system and the way by which mammals regulate their nervous system in response to stress.

Our bodies are naturally in a dynamic state of maintaining our internal conditions as we continually adapt to outside and internal environmental factors. This process is known as homeostasis.The way we respond to changing stimuli is significantly influenced by a variety of factors from nutrition, emotional issues, postural habits, social conditioning,and previous traumatic experiences.

If we’ve endured a traumatic experience that we were unable to process and fully integrate at the time, then those memories can get stored within the body in the form of myofascial (connective tissue) and muscular skeletal tension. This tension then creates blockages within the meridian system and reduces the flow of Qi throughout the body.

When we observe animals in nature after they have been chased by a predator, we can see the natural mechanism by which mammals destress their system from a potentially life-threatening trauma. During the activation of the sympathetic fight and flight mechanism, the body is flooded with stress hormones like adrenaline and cortisol. These hormones divert blood flow away from the digestive organs and other non-essential processes so that the muscles get maximum amount of nutrients, like oxygen and glucose that is carried by the blood.

After the animal, say a gazelle, has escaped and it feels it is in a safe place, like being back in its herd, the gazelle may then go into involuntary shaking to unwind and detoxify the stress hormones that were flooding the system. This shaking is often called neurogenic tremors.

As humans living a modern lifestyle, we experience many stressors that have the same physiological and biochemical reaction within our body, However, we are often in circumstances where this natural shaking process to unwind is not socially acceptable to express. Instead the trauma is suppressed within us. Without this automatic shaking mechanism, tension is stored within the body and creates many imbalances for our health.

Trauma Release Exercises (TRE) have been used very successfully with people suffering from PTSD. TRE are a form of exercises that allows the tension stored up in the Psoas muscle to unwind. The Psoas muscle is a very large muscle that connects the upper legs with the torso.

When we practice Spontaneous Movement Qi Gong, the shaking and other automatic movements that liberates the unhealthy BinQi from the meridians system is very similar in mechanism to the natural shaking that mammals do to release stress and tension from their body’s.

Your body has an innate intelligence to restore balance and to unwind the tension that is restricting the flow of life force through the body. All it needs is the right opportunity, support and resources to do it.

Practicing Qi Gong is a process of emptying. The less baggage you are holding onto in your body, the more stillness and peace you can experience.

However, as with any spiritual pursuit, life may test you and reveal deeper areas of your life that require more light to be shed on.This allows a natural maturation and in time may reveal its higher purpose.

We each have shadow aspects of our consciousness and those shadows contain a gift. As many wisdom traditions have taught, where the hardest lessons are to learn, are where the most gems are for enriching our life.

I hope to see you at a Taijiwuxigong workshop in Bristol sometime. Just email me or reply to this post to express your interest.

More information can be found at:

There are no comments yet. Be the first one to leave a comment!