The Gene Keys is a synthesis of practical wisdom to help guide you to a deeper understanding of yourself and your true potential.

Like a precious treasure map, the Gene keys invites you on a journey of self discovery to find the true higher purpose of your life. Developing your core stability is a vital strategy during these turbulent times. 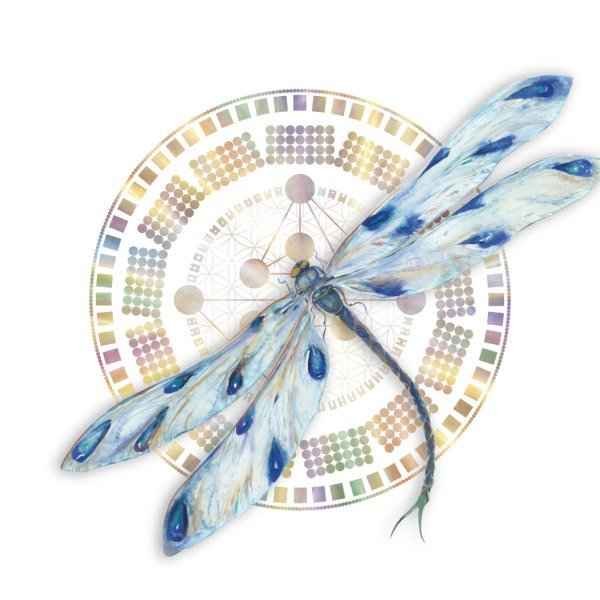 Together with the Gene Keys book, your Gene Keys Profile is a means of revealing the great potential of your life.

It can be described as a contemporary I Ching that flows through life as a synchronistic genetic code. By bringing together astrological calculations and the Ancient Chinese I Ching, your Profile is the original blueprint that offers insights into who you are, how you best shine, and above all, why you are here. At the moment of your conception, there was a specific imprinting of archetypal patterns that influence the qualities of your being this incarnation.

Each one of the 64 Gene Keys expresses a different fractal aspect of the spectrum of consciousness that flows through all life. We are each made up of an individual combination of energetic codes. These codes form patterns in which our lifeforce flows through and expresses itself in all its exquisite  ways, out into the world of form.

The Gene Keys are a transmission of living wisdom that has synthesised areas of Quantum Physics, Biochemistry, Genetics, Chinese I Ching, Astrology and more.

What does exploring the Gene Keys involve?

During our collaboration, I will request your: date of birth, place of birth and ideally time of birth within two hours (for most of your profile, within 12 hours may be fine unless it lays on a transition point in which case we can try each time and assess which resonates most for you).

During an introductory exploration session, I will share some of the key highlights and insights you can derive from your profile.

The Gene Keys, however, are a set of teachings that come alive inside of you as they are imbibed deeper into your being through the process of contemplation. I can offer some inspiration and some guidance, but where you go with the insights is up to you and your own inner alchemical process.

At times there may even be resistance to accepting the aspects of yourself that can be revealed through such an attuned process of self observation.

With courage and an open heart, however, the Gene Keys can guide you inside yourself to greater levels of clarity and certainty about who you are and offer inspiration as to how to express your best self with the world.

Your hologenetic profile contains 3 main sequences that make up what is known as the Golden Path. 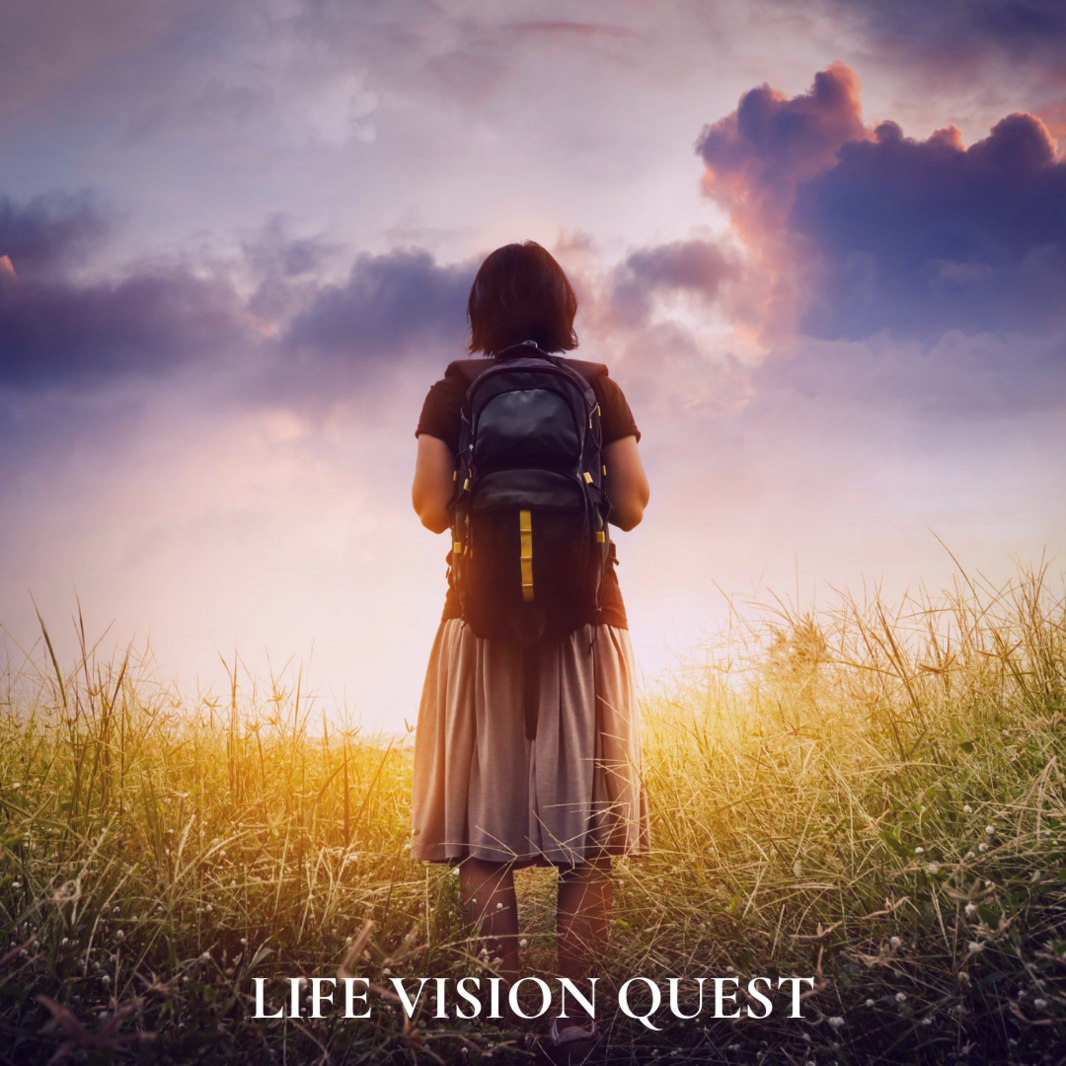 Richard Rudd, who first received the Gene Keys transmission, shares a brief introduction and how to start your journey into the Gene Keys.

The Activation Sequence – Discovering your Genius

The 4 Gene Keys of your prime gifts are the foundational keys to expressing your unique expression of genius out in the world. The four spheres of your Prime Gifts are the cornerstones of your life, representing the mythic themes and challenges of your global role in this lifetime. These spheres are the Life’s Work, Evolution, Radiance and Purpose. The path through your Prime Gifts supports you to fulfil your life’s purpose, while remaining deeply grounded in your physical body. Their gift qualities allow your light to shine out and serve the whole. 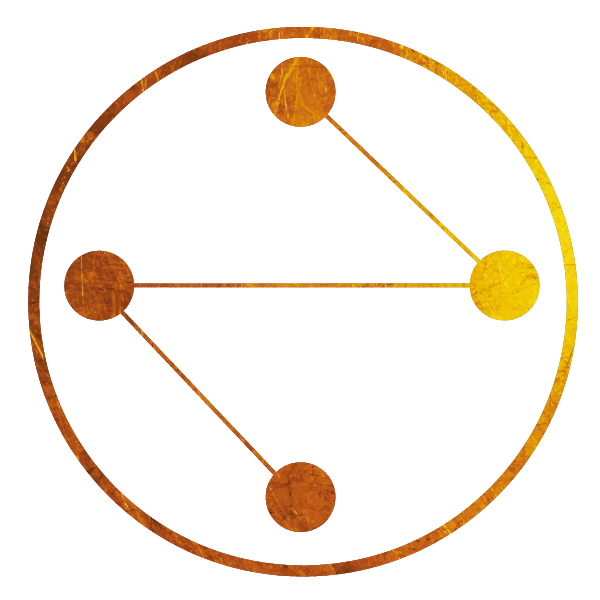 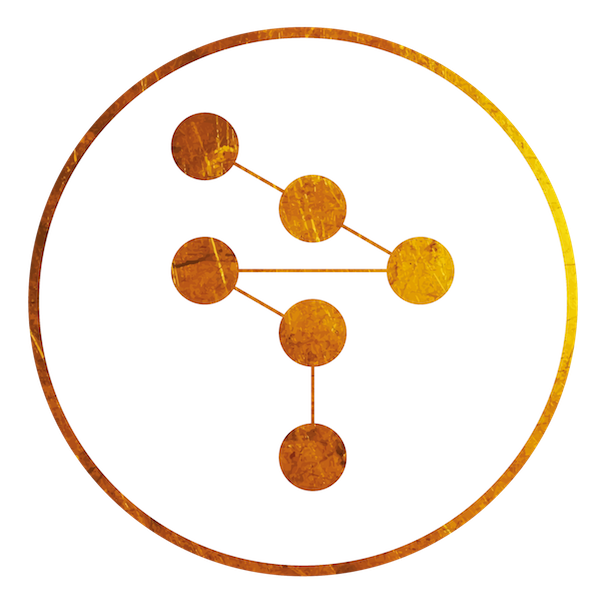 The Venus Sequence – Opening your Heart through Relationships

Forming the heart of the Golden Path, the Venus Sequence is an extraordinary journey into the genetic currents that shaped you in the womb and the karmic forces released at the moment of your conception. It offers insights into the patterns of trauma and defence mechanisms that present themselves through our lives as opportunities for growth and maintaining a gentle open heart.

The Pearl Sequence - Releasing your Prosperity through Simplicity

The four stages of the Pearl Sequence are called the Vocation, Culture, Brand and Pearl. They describe a process of reorientation and synchronicity that brings you into contact with those people, cultures, places and dimensions that are required in order for you to fulfil your highest destiny. They guide you in finding the highest possible form of service you can offer to the world through your inherent gifts. The Pearl brings to you the secrets of prosperity through an embodiment of simplicity. 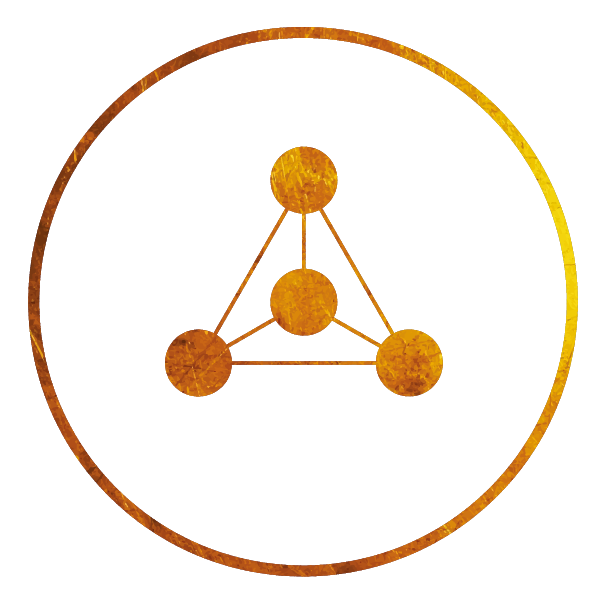 Alchemical Transformation of the Shadow State into the Gift and Siddhi.

Each Gene Key can be transformed into a different expression of frequency band, moving from the Shadow to Gift and Siddhi.

Your shadows are not negative or to be supressed, they are aspects of your self that teach you how to develop your gifts. The gift is the creative response to the shadow. For example in Gene Key 6, the shadow of Conflict teaches you Diplomacy, and ultimately how to create Peace.

The shadow is the raw material like the base metal lead, ready for transmuting into gold as soon as we step out of the victim pattern and reorientate ourselves to practically transform that pattern into its creative potential. This potential always serves the whole as a natural mechanism of embellishing the natural evolutionary processes that enrich life and consciousness itself.

Just as seeds lay dormant underground until the conditions are exactly right to sprout, extracting all the nutrients that are there in the soil requires awareness of its environment in the darkness. By embracing the shadow world, a seed can grow deep roots and emerge into the light where it can share the fruit of its essence.

The Siddhi, also known as the divine gift aspect, is the highest expression of the Gene Key once all realms of the ego self have been alchemised. All that is left is the profound sense of unity with all life.

Learn more about the Shadow, Gift and Siddhi below - from Genekeys.com

The frequency band relating to all human suffering. The unconscious presence of fear in our system continues to enhance our belief that we are separate from the world around us. This deep-seated belief propagates a ‘victim’ mentality, since the moment we believe we are separate, we feel vulnerable. When we live at the Shadow frequency band then we live within a culture of blame and shame. Once you begin to understand how the Shadow frequency controls the majority of people in the world, including yourself, you realize how simple it is to move out of its grasp. Simply by shifting your attitude, you release the creative currents hidden within the Shadow frequencies and your life takes on a higher purpose. Your very suffering becomes the source of your salvation. Thus begins your journey away from those internal patterns and traits that keep you believing you are a victim and towards the inherent genius and love that is your true nature.

The frequency band relating to human genius and open-heartedness. As your awareness delves more fully into the Shadow frequencies, it unlocks latent energy held within your DNA. This energy is released through your physical, astral and mental bodies as light. Physically, this can lead to changes in your body chemistry and increased vitality. Emotionally, it can lead to uplifting feelings, joyousness and a pervading sense of optimism. Mentally, it can lead to insight and great creativity. The Gift frequency is a process of gradual revelation as your true higher nature (the Siddhi) is unveiled. There are many states and stages within the Gift frequency band and it represents the quantum field where the forces of involution and evolution come together. One of the hallmarks of the Gift frequency is the ability to take full responsibility for one’s own karma – that is one’s thoughts, feelings, words and actions. At this level of frequency, one no longer identifies as a victim of any perceived external stimulus.

The frequency band relating to full embodiment and spiritual realization. The very concept of frequencies and levels paradoxically dissolves when the Truth is realised as a Siddhi. The word ‘siddhi’ is from the Sanskrit meaning ‘Divine Gift’. The siddhic state only comes about when all vestiges of the Shadow, particularly at a collective level, have been transformed into light. As you enter the state of Absorption, this alchemical transformation begins to accelerate, until finally, all falls silent and you enter the state of Embodiment at the Sixth Initiation. There are 64 Siddhis and each one refers to a different expression of Divine Realisation. Even though the realisation is the same in each case, its expression will differ and can even appear contradictory. The Siddhis spoken of in the Gene Keys Synthesis are not to be confused with the way they are understood in certain other mystical traditions. The 64 Siddhis are not obstacles on the path to realization but are the very expression and fruition of realization.

The 6 Lines of the Hexagram

The 6 Lines form a powerful underlying pattern within the Gene Keys Golden Path, revealing a specific archetypal lens with which to view the Gene Key in your Hologenetic Profile.

In essence, the six lines tell the story from Personal to Transpersonal. Each line has its own archetypes, its own wounds, its own flavor. This energy stays consistent throughout the entire Golden Path, though its particular keynotes and way of manifesting changes depending on the Sphere it is located within. Below are some key archetypal principles of each of the 6 lines. 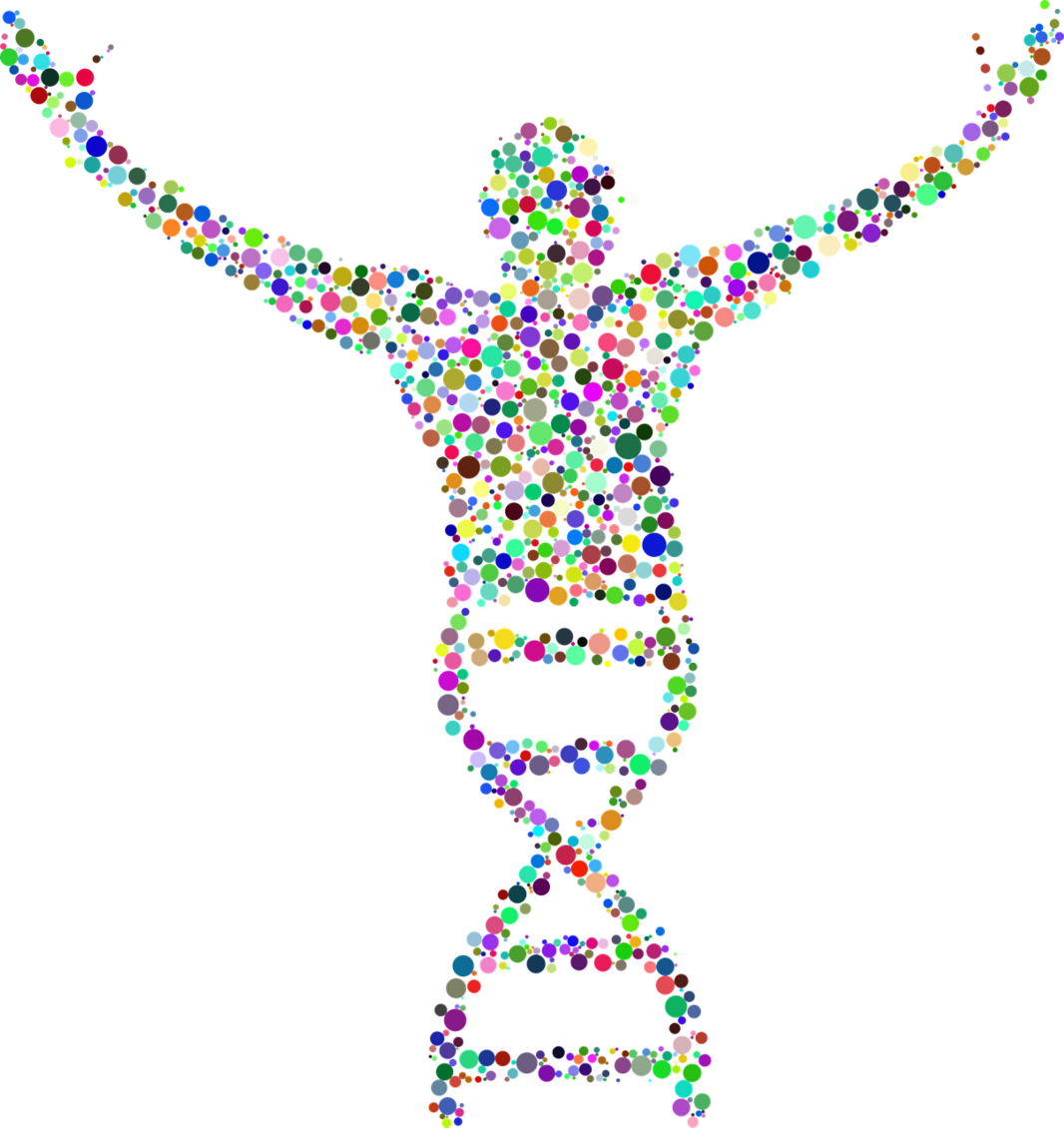 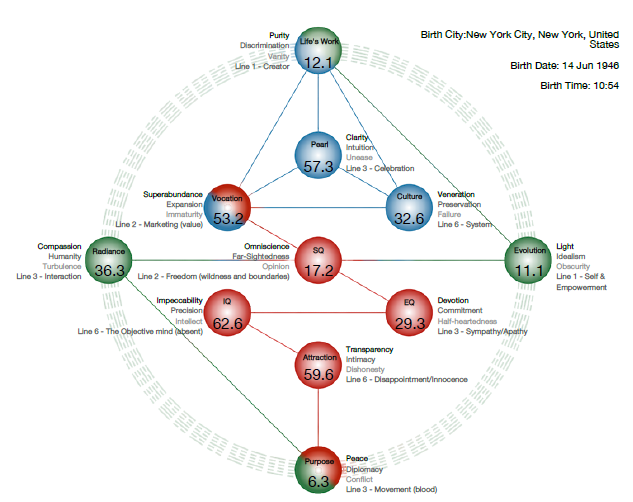